skip to main | skip to sidebar

This Is A Riot! 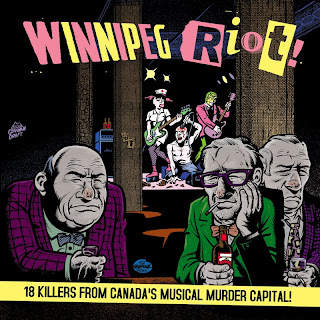 Here's the cover art for the cool Winnipeg Riot! compilation CD, released on Dionysus Records back in 2006. Documenting the Winnipeg rock'n'roll scene from approximately 1997-2004, the CD compiles a whole mess of wild garage, punk, rockabilly and surf combos, all wailin' heedlessly away in a city chock fulla squares. Top local combos The Farrell Bros, The Horribles, Hot Live Guys, Squareheads, American Flamewhip, The Hestons, The Insaniacs and The Mohosimrots are all represented on here (all of 'em have been blabbed about in previous entries on this blog) along with some equally fine but lesser known bands. You can (and should) still order this CD direct from the Dionysus Records website. My cover art was meant to illustrate the degree of indifference these combos faced playing in a city that has pretty much abandoned its rock'n'roll heritage. It is also part of my ongoing series of Grumpy Old Men drawings. For a bonus, here's the poster I put together for the Winnipeg Riot! CD release party at the Royal Albert. Stay tuned for MORE ACTION! 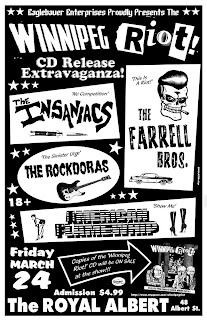